McCain ended a visit to Colombia and Mexico Thursday, The Arizona Republic reported.

McCain was one of the authors of an immigration reform bill that failed to get any traction in Congress, and caused him to lose support among illegal immigration hard-liners. Since then, he has toughened his stance on the issue.

McCain, accompanied by his wife, Cindy, and former Florida Gov. Jeb Bush, also visited the Basilica of Our Lady of Guadalupe, the most important Catholic shrine in Mexico. 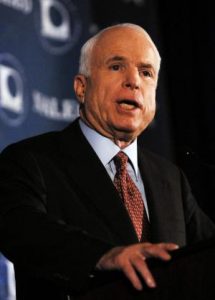